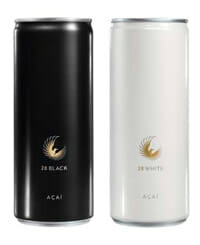 The Acai fruit seems to be everywhere. The media praises it for its antioxidant makeup, ability to improve circulation and fight cancer, and its energy boosting properties.

Acai supplements have become quite popular as of late, so it was only a matter of time before an energy drink was released with an Acai base.

28 Energy, which has become popular in Europe (Calidris 28), has sent us a sample of its White and Black drinks for review. The two are essentially the same, with the exception that White has no sugar.

The place where 28 Energy really shines is in the taste department. This was my first run-in with Acai, so I cannot vouch for how close it tastes to the actual fruit. However, I can tell you these drinks taste great. The flavor is much like a sweet grape flavor, with a pleasant sour finish to it. In addition to that, the 28 Energy Drinks taste substantially the same.

After trying both, I concluded it would be time for a blind taste test. So, I had a friend pour each into a glass without telling me which was the sugar-free one. I could not tell any difference and I think that is the the hallmark of a company dedicated to its healthier fans.

I was skeptical when I read that each 28 Energy Drink had only 80 mg of Caffeine. I drank one of these in the morning and it made me slightly more awake and focused, but this did not last long. When I had the Black, I crashed pretty hard. The White did not have the crash factor, but the energy was substandard. I found these were useful for the mid-afternoon pickup. 28 Energy gave me enough of a lift to get through a lengthy and boring class and I was still able to sleep soundly that night.

28 Energy is a strong newcomer in the market. These drinks are a good alternative for those people who still get a buzz from a can of Red Bull, but are looking for an improvement in the taste department. For me, I need a stronger ingredient profile to get the lift I’m looking for. However, I still really enjoyed the taste of The 28 Energy Black and White. Give it a shot if you find a can in your area.