Alcohol and Energy Drinks: The Dangers of Mixing 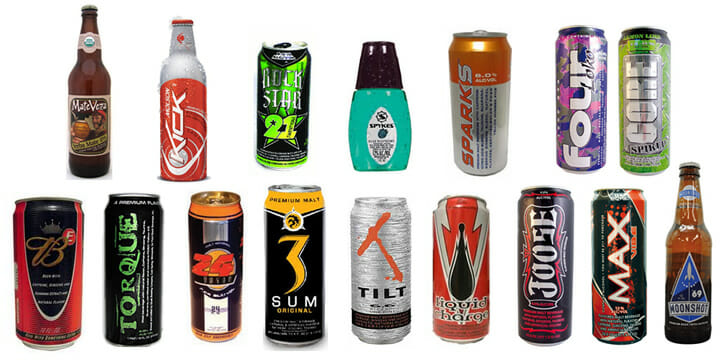 Alcohol energy drink RTD’s are almost impossible to find these days since, for the most part, they have been forced off the market by the FDA and other governing bodies.

They originally became popular in the second half of the last decade, but by 2010 warning letters were sent out by the FDA and these alcohol and caffeine beverages began to disappear.

Some have simply changed their formulation to no longer contain caffeine such as Four Loko, while others have ceased production.

Caffeine and alcohol RTD beverages may still be available in some other countries, but they are pretty much non-existent in the USA.

Alcohol and Caffeine Based Drinks

As you can see from the above list, alcohol/energy drink hybrids are pretty much a thing from the past. The only way you will find a beverage that has alcohol and caffeine combined RTD is if you choose a craft beer. Mate Vesa is one such beer made with yerba mate for natural caffeine.

What about Coffee Stouts and Porters?

Craft beers are made with coffee would have some caffeine but this would vary depending on how much coffee is used in the brew. Beeradvocate.com did a good job of highlighting how this type of beer can be widely different. Here’s what they found:

These would be far from being called energy drinks, though, and because coffee is used as a natural flavoring, do not have to follow the guidelines set forth by the FDA. 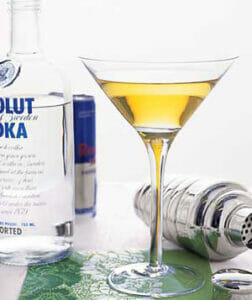 Red bull’s claim to fame was not because of those seeking a pure caffeine rush, but rather their ingenious marketing to the bartending industry.

Vodka Red Bull quickly became the go-to cocktail among party goers who wanted to be able to party longer and since then, there have been all kinds of drinks invented with other energy drink brands trying to get their piece of the pie.

A study out of Wake Forest Medical Center has been looking into this energy drink mixed with alcohol fad in order to see what negative effects it has created. The study revealed the following;

The researchers believe that the high doses of caffeine mask your body’s natural ways of letting you know you’ve consumed too much alcohol, therefore, people tend to drink way more than they should.

Another research study out of Australia also found that mixing caffeine with alcohol gives people the urge to drink more than those who drink just straight alcohol. This can lead to over-intoxication and risk for alcohol poisoning.

Cases of teen alcohol abuse are bad enough, but incidents of teens mixing alcohol and other stimulants such as energy drinks make things worse.

This really was clever marketing on Red Bull’s behalf and I can see why the alcohol industry was quick to embrace it. If you can somehow bypass the body’s natural defense mechanisms concerning alcohol tolerance, then you can increase your bar sales by almost double.

It will be interesting to see how long this type of alcohol and energy hybrid will avoid FDA scrutiny.

No Alcohol and Caffeine Drinks in Database

Here at Caffeine Informer headquarters, we made a deliberate decision – some time ago – to exclude caffeinated alcoholic drinks from the caffeine database. This is a site about the stimulant caffeine… and alcohol is a depressant. We also have people of all ages visit our site and we need to be respectful of that.

The term “alcoholic energy drink” is an oxymoron. There is a large body of research showing that drunk person plus caffeine still equals drunk person. So, hey, we’re just not going there – okay?

Healthy Energy Drinks: Is Organic or All-Natural Really Better?
Energy Drinks
All-natural or organic energy drinks claim to be healthier than traditional energy drinks. What brands exist and are they better...
Written by James Foster, last updated on December 15, 2020