Brain TonIQ: The Birth of a True Think Drink

Recently I took some time to visit a well known tech conference in the Bay Area and started noticing one person after another carrying around a very visually appealing stark white beverage that resembled an energy drink.

As the day progressed I started to notice two things, not only did near everyone have one, but that they were drinking them with faces of happiness and enjoyment. Now this isn’t a common sight for the energy market so I had to find where to get one. What I finally came upon after extensive searching was a new type of “Energy” drink called Brain TonIQ (emphasis on the I.Q.).

Not too long ago it was brought up that caffeinated drinks are starting to divide into Energy Drinks and “Vitality” Drinks. The Vitality option containing ingredients with longer lasting effects that aren’t as thrashing to one’s nerves. Brain Toniq hopes to further separate the market by establishing a branch of Vitality drinks, called Think Drinks, which remove all caffeine and instead replace it with vitamins, minerals, herbs, and natural sugars. The idea sounded risky to me but that couldn’t keep me from trying it.

The Taste Test
Even from the beginning I was unusually excited about this one, the smell wafting up upon opening resembled sweet summer fruit. Fresh peaches, apples, and apricots all came to mind as I poured the 8.4 oz can into a glass. Murky brownish yellow liquid shocked me into contemplation of aborting this review but the smell pulled me back in, seriously, it’s that sweet. The first sip was not entirely what I suspected but it did have heavy accents of fruit (I later found out there in fact is no fruit in this drink, only the organic natural sweetener of agave nectar).

Apart from the fruit, the taste is a truly complex one. The herbs and vitamins give it a VitaminWater taste but the Agave tends to be the main focal point. Afterwards, my tongue had a slight bitterness taste lingering on it and also a strange “dry” texture but both of these quickly disappeared. I honestly didn’t want to chug this drink because it was so pleasant to my taste buds, but I needed to get on to the effects.

The Buzz
Did I miss the 300 mg of caffeine I long for in my everyday drinks? Shockingly, not in the least bit. I was as surprised as those reading this will be but somehow, and I’m still trying to figure this out, I felt a massive boost with no jitters or feelings of urgency. This smooth energy was comparable to 250 mg or so of caffeine despite none being present and lasted much of my day. Going back to the check for foul-play the only ingredients I could find were Choline (helps produce the necessary neurotransmitter acetylcholine), Siberian Ginseng, Golden Root Extract (mood elevator), DMAE (produced by the brain in small amounts, precursor to acetylcholine/ mood lifting chemicals), and Blue Green Algae (antioxidant containing numerous vitamins).

Through further research I concluded that the DMAE was the reason for a large majority of the effects. It is touted as a mood lifter, brain booster, memory increaser, able to aid concentration, and can cause skin tightening (most likely the reason for the “dry” tongue).

The Last Word
My thoughts on the product range somewhere along the lines of wow! and what the hell? But overall I did enjoy the package, smell, taste, and effects. It is nice to know the company is trying to keep the product healthy and using premium products in order to make their drink unique and at the same time increase brain power.

The product is hard to find however, and the easiest place to find it is most likely online. Their Buy Page offers a 4 pack for $13 shipped which is not too outrageous but is a commitment having never tried it. This type of healthy energy is exactly what I was hoping ThinkGum had been but unfortunately had failed to see.

(the half point was for the disgusting color)

Brain TonIQ
Caffeine Amounts
Brain TonIQ is a functional drink that is intended to help you focus. With no caffeine. No processed sugar. No fake anything.... 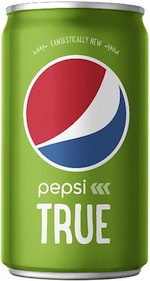 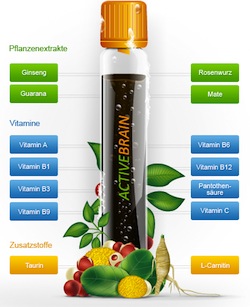 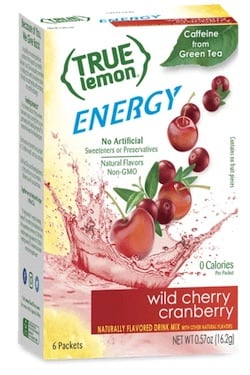 True Lemon Energy Mix
Caffeine Amounts
True Lemon is a brand of drink mixes, including the "energy" formulation that is caffeinated. One packet of the mix...

B 63 Energy Drink
Caffeine Amounts
B 63 Energy drink is produced in Switzerland, but is being marketed around the world. I was recently sent some...
Written by James Foster, last updated on August 18, 2020