Since I was back in the USA for a visit, I checked out what energy drinks were filling the Sheetz coolers.

Monster...no, Rockstar...been there, ah Atomic Blast, there's one I haven't heard of. So I grabbed the green apple flavor and decided to give it a try.

I saved my selection until today while I was on a short camping trip. Could it replace my morning coffee and get me going? I was taking a big gamble because a big day of swimming, rope swinging, and cliff jumping was in store.

Atomic Blast Green Apple comes in a resealable aluminum bottle and when I first screwed the top off, the green apple smell hit my nostrils. The first gulp had a nice green apple flavor at first, but did seem a little watered down at the finish. I think they must have been going for a crisp taste instead of a heavy one.

Atomic Blast doesn't stand out here. Just the usual ingredients and standard amounts. It clocks in at 100mg/16oz on the caffeine front.

Atomic Blast didn't come on fast, but was more of a steady increase in alertness, awakeness, and energy. I was ready to walk the railroad tracks a mile and a half  in order to get to the sweet swimming hole. 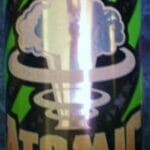 Blast Caffeine
Caffeine Levels
Blast Caffeine is 11 grams of pure caffeine. According to the maker there are about 100 servings per container so...