Buzz Bites Chocolate Energy Chews are soft candy chews that have been infused with caffeine.

See our complete review below. 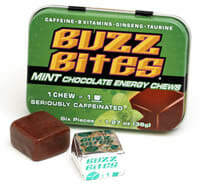 Those of you familiar with the Vroom line of energy candies will remember Foosh Energy Mints.

Although greeted with less than open arms, Foosh mints have lasted the test of time, the truest sign of a good product. With previous successes, Vroom has decided to take another gamble, this time with a pseudo-chocolate looking concoction known as Buzz Bites.

Biases aside, I popped the portable tin container. Inside, I was greeted by the hand of Zeus holding a rather fiery lightning bolt underlined by the words "BUZZ Bites" and the motto "SERIOUSLY CAFFEINATED!" In addition to the proficient use of the caps lock, six large aluminum wrapped cubes awaited my consumption. The foil encasing the black/brown blob quickly fell victim to eager hands.

Face to face with The Blob, I sat contemplating why anyone would rather their caffeine be in a bulky chocolate rather than a small mint. I found far less appeal to this method of ingestion, but perhaps there's a certain market niche that is being marketed to? Chocolate lovers? Non-male chocolate lovers? I'll leave my observation at that.

The smell was rubbery, vaguely reminding me of my last dentists appointment. Fans of latex will be more than pleased with the strange aroma. The texture seemed soft by also gritty. The flavors minty and yet vitamin in essence, not dissimilar to eating mint-brownie mix. My mouth was left with a cool sensation, with a faux chocolate aftertaste that lingered a while after.

I have a common annoyance with the candy energy market and their listings of caffeine. The common practice is to say "Our product has 1.75 energy drinks per serving!" The only problem with this being that a Spike Shooter has a helluva lot more caffeine than even a Redbull. So which energy drinks are they comparing to? With Buzz Bites, they further complicate the situation by stating 1 chew = 1 cup of coffee or 1.25 energy drinks, an even more unreliable statistic given the variation of caffeine in coffee beans. Just tell us the caffeine content for once! We'll all be much happier with your newly found transparency in marketing.

Editors Note: If you visit Vroom's website they clearly state that 1 chew contains 100mg of caffeine.

My final verdict on Buzz Bites can be summed up in four simple excerpts;

As with every gamble, you win some, you lose more. I didn't dislike the product enough to start grass root campaigns against it, but I would suggest you be very familiar with similar chocolate chew products and a bring a very open mind. 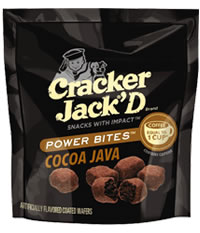 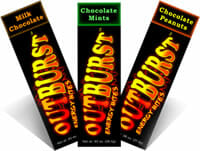 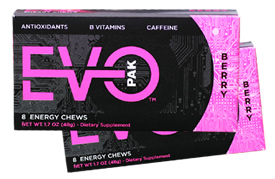