It contains as much caffeine as a small cup of coffee but the product itself doesn't contain coffee.

(Hot chocolate typically has around 5 mg of caffeine.)

COGO is similar to brands like Swiss Miss® but with added caffeine.  It's instant hot chocolate that consists of milk powder, cocoa, caffeine and other additives (see full ingredient list below).

The makers of COGO recently sent us some packets to try.

I've always enjoyed a good hot chocolate as an occasional treat so I was excited to see how COGO measured up to what I was used to given that it has added caffeine which can sometimes be detected as a "bitter" taste.

I always make my hot chocolate with milk so I did the same with COGO even though the directions say to use water. I also made a double since I wanted to see how well it replaced my usual double espresso latte.

I was pleased to discover that COGO made a delicious hot chocolate just as good, if not better than the brands I'm used to. I could detect no trace of the bitter caffeine flavor and I liked the slightly salty flavor that is so popular right now.

I definitely felt the caffeine kick and it was pretty much on par with my usual midday coffee.

Overall, COGO Caffeinated Hot Chocolate is a great replacement for coffee or other hot caffeinated beverages and is perfect for people that don't like the taste of coffee but like the boost coffee provides in the morning.

A Word of Caution...

However, COGO is not a hot chocolate you want to sip prior to going to bed or one that you want to give the kids after they've had an afternoon of playing in the snow. COGO is an adult beverage that should be consumed by healthy adults who understand their tolerance to caffeine. 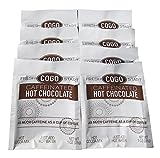 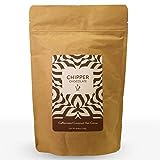