Different serving size? Adjust the size and levels will recalculate.

Cold Brew Tea is made by steeping black tea in water for 8-12 hours.

For this entry, a recipe consisting of one standard teabag per 8 fl oz of water was used.

According to the same study, teabags have the lowest caffeine content and high-quality loose-leaf tea has the highest. This means the caffeine in Cold Brew Tea will range between 70 mg and 105 mg depending on the black tea used. We went with the lowest amount since most people make Cold Brew Tea with standard teabags.

Cold Brew Tea has a smoother flavor when compared to hot brewed tea because hot water releases more of the harsher tannins found in tea than does cold brewing. This is a similar concept as cold brew coffee.

Image by Jurek Kubik from Pixabay 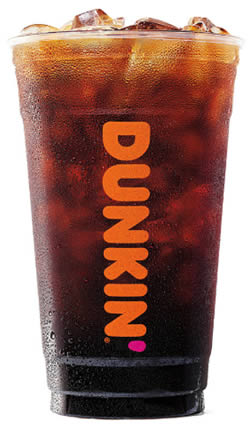 Dunkin’ Cold Brew
Caffeine Amounts
Dunkin' Cold Brew Coffee is available at Dunkin' restaurants. It's made by steeping their signature coffee in cold water for...