Enviga is calorie-burning drink marketed under the Nestea brand.

It is a joint venture between the Coca-cola company. The cans come in a number of flavors including Green Tea, Peach, Citrus, and Berry.

Enviga claims to cause a "negative calorie effect". According to a study of an Enviga prototype - consuming three cans a day produced a calorie burn of between 60-100 calories in healthy adults aged 18-35.

The green tea extract called EGCG (epigallocatechin gallate) apparently increases metabolism. Enviga will have 90mg of EGCG in each serving.

As the drink itself contains only 5 Calories - this leads to what is called the "negative calorie effect".

Enviga is not the only "weight loss" drink to hit the market (i.e. celsius or Fuze Slenderize)

From the enviga website at http://www.enviga.com/
Other references. Last updated on 22 Jan 2014.
Suggestions or corrections? Send Feedback

THINQ Functional Energy Drink
Energy Shots
A review of THINQ a new "functional" all natural energy drink. Does it energized both mind and body?

FRS Energy Concentrate
Caffeine Levels
FRS Concentrate is a non-carbonated energy drink that must be mixed with water (2 fl oz of FRS to 6... 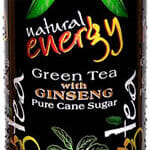