Nawgan is a an energy drink that is marketed as a Brain Supplement.

In a short bought of irony, opening up my first case of Nawgan left me confused as to what the drink’s title was trying to tell me.

It was only until I said the word out loud that I realized what this drink was calling itself. Don’t understand it yet yourself? Let me put it this way: I was not using my Nawgan when I first read the label.

If you still don’t get it, then there’s no hope for you, not even from a drink like this.

Shortly before trying my first can of Nawgan, I read about the history of the drink, its purpose, how it planned to achieve its claims. This drink is so heavily founded on cerebral stimulation that when I first drank it, the odd taste made me think, “this is what cerebral spinal fluid must taste like.” It’s horrible for me as a reviewer to say something like that, but I’ve been through 6 years of collegiate education in psychology with multiple neuroscience classes, so it was a perfectly acceptable analogy for me.

So anyways, this taste. Try this on for size: imagine what the taste equivalent would be of an off-white color. For me, that nails it. It’s not quite transparent, but is lightly tainted with an unattractive and bland character.

Ok, here’s the deal: there’s a caffeinated version with 100mg and one without caffeine. Above that, you’re going to have to check out their website. I don’t feel like copying over an entire ingredients label that seems to be written in Na’vi (Avatar. Watch it.).

I’m disappointed. Not like a parent disappointed in their delinquent child, but disappointed like dropping a hard-boiled egg in the trash can I’m peeling it over. I had hopes, not dreams, for this drink and it just didn’t make the cut. Maybe it’s because I’m comparing Nawgan directly to the untouchable NERD (and rightfully so). Maybe it’s because these drinks did barely anything I could notice. Maybe that’s because my brain is just naturally accelerated now from the thousands of energy drinks I’ve had. Or on that note, maybe I’ve developed a permanent, life-threatening tolerance to energy stimulants. I’ll just shut up now.

Assuming NERD is still in production; if smart, wholesome, brain-accelerating energy is what you seek, walk on past Nawgan and into NERD’s ever-loving arms. Sorry, Nawgan, you’re just not my type.

our review
Other references. Last updated on 5 Mar 2021.
Suggestions or corrections? Send Feedback

Zun Energy Drink
Caffeine Levels
Zun is an Energy Drink that is marketed to "boost brain energy" it is fortified with co-enzyme Q10. Also comes... 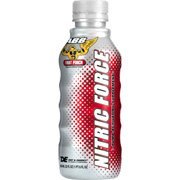