This item has very high levels of caffeine
Discontinued? This item may no longer be available.
Correction? Send Feedback

A few weeks ago, the sequel to one of my favorite movies of all time was released in theaters.

I’m referring to Transformers: Revenge of the Fallen, a movie I’ve been awaiting as anxiously as a surprise return of Surge.

Problem was the midnight release was sold out. With that news, my friends and I did the next most sensible thing; we bought tickets for a 3:30AM showing. To ring in the event and pass the time, we started watching the original Transformers on DVD at 11PM.

The stage was set to put a new energy shot to the test. Lights, camera, action!

Red Fin Energy has a sweet berry taste that is honest up until you swallow. At that point, you’re reminded it’s still an energy shot you’re drinking. The standardized somewhat bitter experience is fairly short-lived, though. The show goes on.

As far as B-Vitamins go, this is just another Chaser 5 Hour clone. I was so disappointed the first time I read down the ingredients label and saw that magic 8,333% B12 content value. As I continued to read on, though, I saw something ridiculous: a disclosed caffeine content! On a B-vitamin shot! Red Fin bares no shame in listing their whopping 200mg caffeine content. Pair that with standard B-vitamin boost most of us have come to love and you may just have a winner.

Remarkably, I lasted through watching the original Transformers, standing in line for an hour, and watching the longest movie of my life, without EVER feeling fatigued or tired. We’re talking about sitting down from 11PM to 6AM, including all the driving in between.

Granted, I was ready to pee my pants with anticipation all night and the visual effects in Transformers: Revenge of the Fallen constantly threatened the structural integrity of my occipital lobe. Without such stimulation, maybe Red Fin wouldn’t have performed so well, but so what. I needed energy for a 6 hour period and Red Fin did not let me down.

I have no idea how Red Fin plans to keep itself alive in today’s energy shot market. The name and image doesn’t look like it will hit home with too many consumers and that’s everything in a market where everything looks the same. It’s a shame that the majority of consumers will never find a reason to give this wonderful energy shot a try. You though, the educated consumer, have no excuse to not try it if you see it!

NOS Energy Shot
Caffeine Levels
It appears this may no longer be on the market. This is the most powerful shot to date on the... 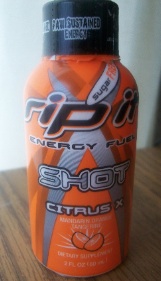