This item has very high levels of caffeine
Different sized cup, can or bottle? Adjust the amount and levels will recalculate.
Discontinued? This item may no longer be available.
Correction? Send Feedback

SLAP has recently increased their caffeine content from 200mg to 220mg. 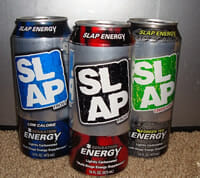 Here’s a fun factoid: SLAP is only the 5th energy drink I’ve reviewed with a verb as its name (Alongside Flirt, Mini Chill, Sin, and E-Boost).

Now that we have the pointless matters out of the way, let’s get onto the meaningful content, shall we?

I was sent three flavors of SLAP, and they are all born from a quality blood line. Frost is the default flavor, given that it also comes in a low calorie version. There’s also Crisp Apple.

Frost is a treat to drink. It’s solid-bodied with a crisp, clean finish and a very slight hint of Monster. Frost Low Calorie, as you may expect, is a defunct offshoot of the regular version with its more conservative ingredients. Crisp Apple is just as good as, if not better than, Xyience Xenergy Apple Jak’d (the only other apple flavored energy drink I’m aware of). It tastes like Sprite combined with an apple Jolly Rancher, and is downright tasty.

While all three SLAP drinks pack 200mg of the good stuff and a combined 300% of vitamins B3, 6, and 12, Crisp Apple also adds in a measure of green tea solids. Guarana also says what’s up from deep within the “Energy 9.0” Blend, whatever that means.

Yep! I mean, isn’t that all you need to hear? Honestly. Yep, SLAP Energy Drinks wake you up. Yep, they do so reliably. Yep, they won’t make you crash. Yep, they perform wonderfully. Yep!

From my viewpoint, these drinks are an outright success. For the makers of SLAP, they may currently be feeling a twinge of disappointment. Why’s that? Because I said nothing about the drinks and their claimed “multi-stage energy” abilities or Frost’s claimed mouth “chilling” ability. Why didn’t I address those points? Because neither of them existed, that’s why. No hard feelings. 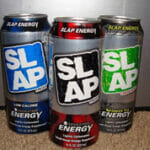 Relentless Energy Drink
Caffeine Levels
Relentless is manufactured by the Coca-Cola Company and was released in 2006 in the UK. It then made its way...