Street King Energy Shot is an extra-strength energy shot with an extreme amount of caffeine. It was originally developed by rapper, 50cent, but has since been acquired by PureGrowth and reformulated. We estimated the original Street King Energy Shot to contain 100mg of caffeine, but the new Extra Strength version (The only one now available) contains a whopping 280mg/bottle. Street King states that they have left out "common, controversial industry ingredients like taurine, guarana and ginseng".

All flavors are sugar-free and sweetened with Sucralose and Ace-K. In 2013 Street King is ranked as the 6th highest selling energy shot with 5 million dollars in sales. King 888 Energy Drink
Caffeine Amounts
King 888 is a brand of energy drink. It comes in a number of flavors including Silver (citrus), Gold (Ginger...

Tweaker Shot
Caffeine Amounts
Tweaker shots are a line of highly caffeinated energy shots. The manufacturer suggests only consuming half a bottle at a... 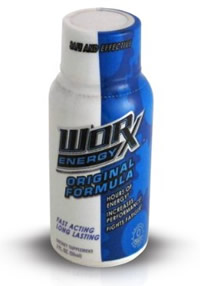 Worx Energy Shot
Caffeine Amounts
Worx Energy Shot is a popular energy shot made by Monster Energy. It is available in two formulations; original and...