Caffeine in Tea varies quite a bit. The longer the tea (or tea bag) is steeped in water, the more caffeine will be present.

On average loose black tea had 22-28mg of caffeine per 1 gram dried matter.

Most tea manufacturers do not list caffeine amounts on labels (one exception is Lipton regular tea listed at 55mg per serving).

The amount listed above is an average amount taken from various laboratory tests. Originally we listed an amount (47mg/8 fl oz brew) taken from the USDA. However more recent lab tests show this amount to be lower.

The following table lists recent lab test results for one tea bag of the various brands steeped in 6oz cups of water.

Zest Black Tea has 150 mg of caffeine, but it is infused with extra caffeine.

What About Herbal Teas?

So-called herbal teas aren't actually tea at all, but a collection of other herbs and flavors. Herbal teas do NOT contain caffeine.

What About Green Tea?

Green Tea contains less caffeine than black tea. However it also is affected by brew time. The longer you leave your bag in the cup, the more caffeine you will get. See more about caffeine in green tea.

Where To Buy Black Tea 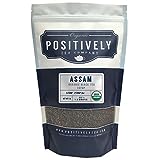 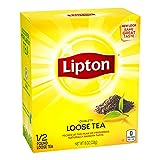 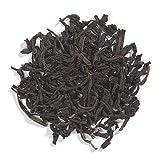