Voke Chewable Tabs are marketed as a dietary supplement that uses natural ingredients to produce feelings of energy and focus.

They are also marketed as a healthier and more affordable way to get your daily caffeine fix than coffee, tea, or energy drinks.

I recently received some samples of Voke for review.

As of late, there seems to be a flux of chewable-type energy tablets hitting the market, so I was curious to see how Voke compares.

Voke has a nice berry flavored taste that finishes with a slightly bitter flavor from the caffeine.  This, in no way, was a deterrent but was detectable.

Voke contains guarana, green tea extract, and acerola cherry as its active ingredients plus it is naturally flavored and colored with beet juice.

The tabs are sugar-free and sweetened with sugar alcohols, stevia, and monk fruit.

I was a tad confused about the caffeine info as the can says that the 77 mg of caffeine is from the green tea but doesn't mention the caffeine that would be found in guarana berries.

I received clarification from the company that 77 mg is the total caffeine. The majority of the caffeine comes from the green tea extract.

I consumed a Voke Tab instead of having my first cup of coffee. In about 15 minutes, I began to feel the effects of increased alertness and motivation.

This effect lasted for about an hour. I would probably need at least 3 Voke Tabs to replace my usual 2 cups of coffee and keep me going all morning long.

Overall, Voke is a nice alternative to coffee or energy drinks and a convenient way to get a quick energy boost on the go.

Voke isn't recommended for children or those sensitive to caffeine. Those with small children should keep Voke well out of reach since it could easily be mistaken by children as candy.

Neuenergy Chewable Tabs
Caffeine Amounts
Caffeine amount in Neuenergy as well as a review of how these chewable energy tabs taste and function. 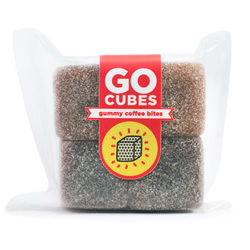 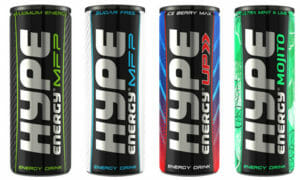