Caffeine in the Breast Milk of Breastfeeding Mothers

Caffeine in breast milk can vary depending on how much caffeine the mother consumes. 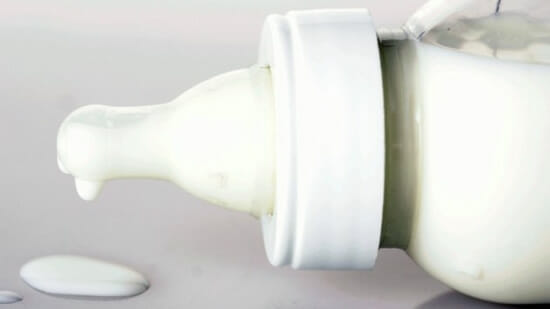 The amount of 1 mg of caffeine per 3.4 floz or 100 ml of breast milk is the estimated amount present after a breastfeeding woman consumes a 16 floz Grande brewed coffee from Starbucks (330 mg of caffeine).

Researchers found that women who consume 100 mg of caffeine usually transfer about 2-4 micrograms of caffeine per 1 ml of breast milk with peak concentration being 1-2 hours after consuming the caffeine.

They concluded that single doses of about 200 mg pose no risk to the nursing child, but breastfeeding women should consume no more than 200 mg of caffeine per day in total.

However, other research shows that up to 3 months old, a baby’s body does not do a good job of processing caffeine. Therefore, it can build up in the baby’s system over time. A review of all research to date conducted by the University of Warwick found that there is no positive or negative association with small amounts of caffeine in breastmilk as it relates to the health of the baby.

Breastfeeding mothers should keep this in mind when consuming anything containing caffeine, however, after 3 months it is probably safe for mothers to have moderate caffeine amounts of 200 mg per day.

It is worth noting that caffeine, when given to premature babies or babies with low birth weight, actually stimulates their breathing and prevents sleep apnea and possibly sudden infant death syndrome. Recent research concluded that this treatment is safe and poses no risk to the baby’s cardiovascular system.

However, only medical professionals should administer caffeine to at-risk newborn infants since accurate dosing is paramount.

Research has just been released that shows that almost all of the samples of breastmilk tested from an online breastmilk marketplace contained levels of caffeine. Women should use caution when using such resources. The researchers also found bacteria and unsafe levels of other drugs in the samples obtained.
READ THIS NEXT

Caffeine Causes Breast Shrinkage A Swedish study found that caffeine may cause decreased breast size in some women. Is this study accurate and should women give up coffee?
READ MORE...

Caffeine During Pregnancy: How Much is Safe? Consuming caffeine during pregnancy is up for debate by professionals. Here are the researched risks and safety guidelines for pregnant women to consider.
READ MORE...

Prevent a Stroke By Drinking Caffeine A summary of research studies that look at caffeine, coffee, and stroke risk. Does caffeine reduce risk or increase it?
READ MORE...

Coffee, Caffeine and Type 2 Diabetes Several studies show that caffeinated coffee decreases the risk of type 2 diabetes and is safe for those with diabetes. We outline the results of each study here.
READ MORE...