Demon Energy Drinks are found in Australia and New Zealand and currently comes in 3 varieties.

Here we review Demon and compare it to other drinks>

Envy is Demon Energy Drink’s latest version to hit the Southern Hemisphere Market.With Envy, Demon is using the 7 deadly sins as a marketing slogan which is a little familiar as SIN energy drink has launched the first of their 7 deadly sin inspired drinks as well in the USA.

Also, by reading the description on the can, they are trying to out do the “other green drink” here which is V energy drink. So we’ll see if Envy Energy Drink has the power to topple the New Zealand and Australia energy drink giant.

Maybe it was my preconceived notions from reading the can, but Envy tastes a lot like V original. It is a tad sweeter than Green V and has a tad more flavor, but essentially pretty similar. I guess Demon figured if the Green V flavor is so popular, then it wouldn’t hurt to mimic it and even try to improve on it.

I’m not sure it’s any better as I’m not a big fan of Green V or the flavor of Envy. This flavor doesn’t do a great job of covering up the mediciney taste of the energy ingredients.

Demon Envy has similar ingredients to the other varieties of Demon, but despite the claim of “a massive energy hit”, Envy actually has less of all the standard ingredients, except the same 160mg of caffeine per 500ml can.

Since my detox from caffeine awhile ago, I’ve been allowing myself to have the good stuff twice a week so I can continue to feel the full effect of the wonder drug. With this in mind, the effects of Demon Envy were quite noticeable and sent me from sleepy to euphoric in about fifteen minutes.

Demon Envy energy drink will be a hit for those who are fans of Green V, but if you are looking for something new and exciting you’ll be disappointed by Demon Envy.

A brand that has been working hard to establish themselves as an energy leader down under, is Demon Energy.

With its parental advisory warning printed on the can and the other statements such as “No Limits – No Laws” you would believe this drink is sweet as , but we’ll see if it lives up to all the hype aye.

Basically, Demon is a cherry flavored energy drink much like the many other drinks who adopt this flavoring.  It was easy to drink, but I wouldn’t say it offered my taste buds a unique, exhilarating experience.

Demon Energy contains the standard energy ingredients with 2000mg of taurine and 160mg of caffeine, which they say is the maximum amount the police will allow, unfortunately, this is true as caffeine content is restricted in New Zealand and Australia. The vitamin B assortment, however, was a little on the “soft little boy” side.

The can has an energy warning saying it has 20% more energy, but in reality they have increased the size of the can 20% so they could increase the caffeine content without breaking the law. I was possessed by Demon  after already having two cups of coffee earlier and I must say I have felt a noticeable increase in alertness and awakeness, not bad…..

Demon doesn’t win any awards from me, but it’s a decent drink and I would drink it again if my favorites weren’t available. The price makes it attractive as well, as it’s often offered for cheap as in the grocery store.  In an ever increasing southern hemisphere market it will be interesting to see how this drink evolves in the future in order to attract sales.

This version of Demon has been discontinued.

Translation: Demon Killa Troppo is Kiwi for Demon Killer Tropic.That was just for all of you in the rest of the world who might care to read this.

Now that you understand the name, you can guess that Killa Troppo is  Demon’s stab at the juice energy drink market. They’ve been working hard in New Zealand and Australia to establish themselves as an energy drink leader and they’re doing a good job, I must say and Killa Troppo is no exception.

Demon Killa Troppo tastes similar to Rockstar Juiced which is orange, mango, and passion fruit flavored. However, in the ingredients I see that apple and pineapple are thrown in there as well. Now listen closely…I’m a big fan of Rockstar Juiced, but Demon Killa Troppo is better! Did you hear me? Yes, a small company from little ol’ New Zealand has beaten an energy drink giant like Rockstar.

The one fault I have with juiced drinks is the use of sucralose (splenda) in them. Killa Troppo has none, it is just sweetened by the fruit juice and plain sugar! No wicked after taste and the right amount of sweetness. Along with the 60% juice you get 140mg of caffeine, taurine, glucuronolactone, inositol,  B2, B5, B6, and B12.

Despite the “parental advisory”, Demon Killa Troppo energy drink won’t send you soaring by any means unless you’re a light weight. However, it does offer a nice pick-me-up if you need something to get you through the afternoon or a long road trip.

If you’re a fan of tropical juice, you’ll love Killa Troppo and although I paid $3.40 for the can at the dairy, Demon often has great deals on their products at the super markets.

Way to go Demon Killa Troppo!  You just replaced my number one go to drink in NZ, which used to be Rockstar Juiced…..

What do you think of Demon Energy Drinks? 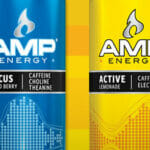