Dopamine energy Drink has to be one of the more original names for an energy drink. Dopamine is actually a brand that sells mostly clothes.

But – like many other brands out there – they’ve added an energy drink in the mix.

Dopamine is “a hormone and neurotransmitter occurring in a wide variety of animals”. It can also be supplied as a medication.

Dopamine is commonly associated with the pleasure system of the brain, providing feelings of enjoyment and reinforcement to motivate a person proactively to perform certain activities. Dopamine is released (particularly in areas such as the nucleus accumbens and ventral tegmental area) by naturally rewarding experiences such as food, sex,[4][5] use of certain drugs and neutral stimuli that become associated with them.

Okay… so strong drug overtones – but not quite as overt as calling a drink cocaine.

These guys have been one of the very few to actually respond to our caffeine queries (most just ignore).

And there is no dopamine in Dopamine Energy Drink. 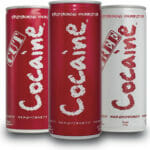 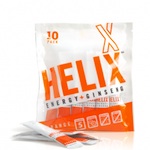 Helix Energy Drink
Caffeine Amounts
Helix is an orange flavored energy drink mix. The caffeine amount would be for one packet of Helix mixed into...