We’ve seen a plethora of caffeinated products come across our desk at Caffeine Informer over the years, but caffeine infused electronic cigarettes probably takes the cake!

This product is actually called Caffeine Infused Electronic Shisha and they aren’t really “e-cigarettes” since they contain no tobacco or nicotine.

I was recently sent a few free samples of Shisha from the company to review. They operate out of the USA.

The best way to describe these to people is to describe Shisha as caffeine e-cigarettes because that is how they look and function.

I inhale the caffeine/ taurine infused vapor, the end of the device lights up and I exhale a water vapor that resembles smoke.

Side note: I have never been a smoker, but I have to admit this product is pretty innovative and was fun to try. It was really hard to stop after the recommended “no more than five 3 second puffs per session“.

This potentially makes Energy Shisha a tad dangerous, but I’ll get to that later. First, let’s look at what’s in this caffeine e-cigarette-like stick of wonder.

Seems pretty simple and the product states that there are up to 300 puffs per Shisha. Now the hard part: figuring out the caffeine content.

Here’s what we know:

What we don’t know:

Its Effect on Me

I took 5, three second long inhales one after the other as directed. In about 5 minutes I began feeling more alert and after 10 minutes I had a slight caffeine buzz going.

So, these caffeine Infused e-cigarettes do indeed work as advertised and I’m impressed given the fact that they aren’t delivering that much caffeine.

The effects of 5 puffs don’t last long (about 15-20 minutes) , so I guess that is why they recommend no more than 20 puffs in an hours time.

Are These Caffeine E-Cigarettes Dangerous?

This is clearly a tumultuous time to be launching a caffeinated product of this nature in light of all the recent uproar over caffeine in products, however, Shisha is doing some things right.

They label the product as only for those 18 and older and include recommended dosage warnings.

I see this product as being highly attractive to those under 18 and they could probably get their hands on them pretty easily if they wanted to.

There just isn’t a dangerous amount of caffeine in Energy Shisha to cause caffeine overdose in children or adults.

A recent study showed that the chemicals in these devices does pollute the air and potentially cause harm to the lungs. Here’s a part of their conclusion:

Our data confirm that e-cigarettes are not emission-free and their pollutants could be of health concern for users and secondhand smokers. In particular, ultrafine particles formed from supersaturated 1,2-propanediol vapor can be deposited in the lung.

We certainly don’t have the answers to all of those questions, but Caffeine Infused Energy Shisha is an interesting and innovative caffeinated product that will for sure get some attention.

Energy Shisha started in the UK, but ships to most places around the world and now has official USA distribution. 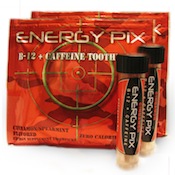 Energy Pix Caffeine Toothpicks
Caffeine Amounts
Energy Pix are toothpicks that have been infused with Vitamin B-12 and Caffeine. In addition to the 7 mg of...

Purecaf: Potent Liquified Caffeine
Supplements
Purecaf is a 2 fluid ounce bottle of liquid caffeine. There are several products like this available and one even... 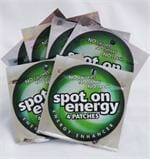 Spot On Energy: The Caffeine Addicts Patch!
Energy Drink Reviews
I was convinced that if there were anything that you could squeeze a milligram of caffeine into, it had been...

Stakk’d Caffeine Mixer
Caffeine Amounts
Stakk'd caffeine amount as well as a review of how this concentrated caffeine mixer tastes and functions. We also evaluate...

Nano Coffee Energy Tablets; Caffeine Consumption in the 21st Century
Supplements
It has been predicted that in the not too distant future whole meals will be provided to us in pill...
Written by Ted Kallmyer, last updated on April 30, 2015