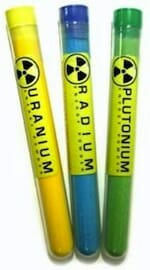 Put on your HAZMAT suits because Harcos, and the nutters at their laboratory are back with nuclear vengeance. The white coat clad energy lovers have knocked heads and come up with three flavours of truly awesome caffeine impregnated sherbet tasting Nuclear Energy Powders.

Now I don’t know about you, but if you’re like me, your life long dream is to ingest chemicals with more electrons then you can shake a stick at… Well these three Energy Powders are about as close are your going to get with out ending up in a white tent like E.T.

The ingredients for this are simple as can be, a bit of carbohydrate and lots of caffeine (90mg to be precise). This isn’t trying to sell you energy with the healthy stuff like B vitamins; this is just pure sugary, caffeine fun and lots of it at that.

I was having a great time with these, bare in mind I fell in love with Radium and Plutonium and created my own Ranonium, so I ingested a fair bit of sugar and caffeine and I have to say it was good. There was only a tiny downer after, I would say, 3 or 4 hours and that was it. I’m sure had I had all three Nuclear Energy Powders the effect would have been better. But just bare in mind that these things go down like water, you will be high as a kite before you even realize it.

Whilst I will admit Nuclear Energy Powders won’t be replacing your daily energy drink intake, they are a great laugh and at only £1.90 from TheGeekestLink, I feel confident I can use the word bargain. I would defiantly recommend you give these a go you won’t be disappointed. If anything I hope Nuclear Energy Powders are the start of a revolution in which you can only buy sherbet with caffeine in it.

Overly Opinionated Review: Nuclear Waste Antidote
Energy Drink Reviews
I'm not going to talk about the name. I refuse. Suffice it to say that--with much respect to Messrs. Layman... 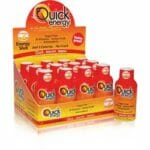 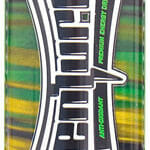