Wow. This is almost all I can say about this one-of-a-kind bombshell of an energy drink by iSatori. Designed to give an immediate and long-lasting energy rush, they didn’t compromise one bit in creating this raging blue bullet. Will it be enough to satisfy even the most hardcore energy drink lovers?

This tastes very similar to blue Kool-Aid, but leaves a strong aftertaste due to the acesulfame-potassium and sucralose used to sweeten it. This bullet is meant to be slammed back fast! It has a syrupy texture which isn’t surprising since there is a lot of stuff that gets packed into this 2.9oz shot.

This hardcore drink contains an absolutely whopping 300mg of caffeine as well as amino acids, B-vitamins, theobromine, ginseng, rhodiola rosea, and more. One odd but smart ingredient added was policosanol, a nutritional supplement that is said to reduce bad cholesterol levels. As I said before, it is artificially sweetened with ace-K and sucralose.

When you slam this shot back, you feel it – fast and hard. The caffeine rush was unbelievably powerful, almost too powerful for me! If you want energy now, then this is the shot to have. However, after 6 hours or so, I had a small headache, which could be because of the ace-K sweetener.

Not much else comes close to the power in this bullet, and it’s a given that this is no casual drink! I’d like to see some different flavors, but for now, this reigns as one of the most powerful, hardcore shots I have ever had. 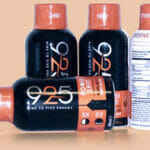 925 & Player Aid Energy Shot Review
Energy Shots
I was very pleasantly surprised when I found two cases of energy shots in the mail - both addressed from...
Written by Ted Kallmyer, last updated on January 8, 2021