I know that all of you energy fiends in the southern hemisphere often feel neglected by us. This review is for you!

The drink varieties just don’t exist down under because of the tough caffeine restrictions, but slowly more drinks are emerging as the consumer demands more choice.

I was on a road trip to Wellington this past weekend and was stoked to see that Mother jumped the ditch from Oz and made it to New Zealand. I was driving the second late shift so I snatched  a Mother Inferno up, hoping that it would do it’s stuff as the can proclaimed “Heaps of Energy”……..

When I looked at the orange accented can I was kind of expecting a juiced type of drink, but to my surprise the drink was definitely citrus based, however, not super sweet like I expected. It really had a crisp light taste that I found pretty refreshing. The can states “Best Drunk Freeze Your Nuts Off Cold!” which is how I drank it and you got to love the Aussie humor. The Drink did have a slight energy drink taste, but that is what it is and it wasn’t overpowering.

Mother Inferno contains the usual suspects when it comes to ingredients and a 500ml (17oz) can contains 160mg of Caffeine. This drink does have more caffeine than the standard drink here and it looks like they have gotten away with this by making the can 17oz instead of the standard16oz. In the ingredients the can states that it contains “fish derivatives”, yum fish……

My daily caffeine intake is usually around 250mg and only in the morning. This drink did pick me up and made the drive much easier and I wasn’t jittery nor did I experience a crash by falling asleep at the wheel or by coming off the caffeine jolt.

I would recommend this drink to anyone down under who hasn’t tried it yet. This drink is made by Coca-Cola so I would be curious to know if it mimics any of the drinks they produce in the States or the Relentless Inferno that they market here.

“When your mate turns up with a wussy-sized can, you can raise your Mother up and proudly say, did yours come with a man bag?” 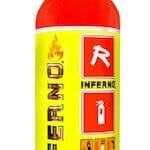