The little blue pill has gained a big brother today with the drink that can pretty much label itself as sexy time in a bottle.

iShot Love Potion, the cheeky buggers, have come up with a new drink that lets you go all night long (the bottle even says so)! Now whilst I hope my girlfriend doesn’t read these reviews, I thought it would be fun to take these drinks away for out Valentines week away to see what they really did.

In hindsight I really did not need any “prompting” so this review might be slightly biased, but either way here is an insight into the wonderful world of the little black bottle called iShot Love Potion.

I have to admit I struggled to find a definitive flavour here, as it didn’t come with any real hints as to what it was supposed to be. Even after trying it a few times, I was unable to come up with an exact taste. What I can say is that it is defiantly different, however, iShot Love Potion is light, fruity, and pretty tasty.

iShot Love Potion All Night contains a nice little packet of caffeine (90mg) and a healthy dose of B vitamins. However, this is the important part, this drink contains a pleasure blend consisting of Damiana, Korean Ginseng, Green Tea and Guarana. This blend makes up around 760mg which after a little snooping on the net I found out was enough to give even the most lifeless pensioner a little bit of a chubby.

Ahh, back to caffeine! The caffeine content I have to say gave me a little kick but not much. It was just enough to keep me up for that little bit longer on our nights away, but then again, this is meant to be taken at night so caffeine isn’t that much of an issue. As far as the sexy content of this drink went I have to say, I can’t confirm Love Potion’s claims but the science behind it says it helps.

So far iShot has given us hyperactivity, weight loss, and now a raging hard on (or female equivalent, yes its unisex). This drink looks funky, tastes pretty cool and to the best of my knowledge has the potential to cost you a lot of money in bed replacements. However, whether or not iShot Love Potion replaces the coveted little blue pill is something I can’t say, but what I can say is this is a lot more interesting then a pill and contains a nice little bit of caffeine to keep you up that little bit longer. 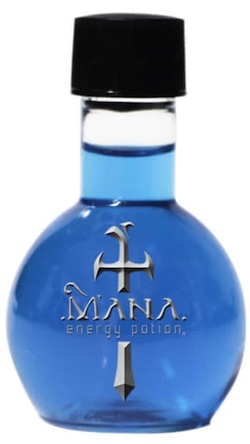 Mana Energy Potion
Caffeine Amounts
Mana Energy Potion is a niche energy shot  intended for gamers. It resembles a magic potion that you will find...
Written by Ted Kallmyer, last updated on September 2, 2016