Lost Five-O Energy + Juice has been on the market for a little while, but after 30 hours of flying and sitting in airports coming back to east coast USA from New Zealand, I needed some serious jet lag medication.

I dragged myself up to the local 7-Eleven with a list of new energy drinks to try out for energyfiend, however, small town, USA 7-Eleven had none that were on my list.

My eyes were frantically searching the rows of drinks looking for a drink that we haven’t featured in one of our reviews when Lost Five-O caught my eye.

I paid the $2.59 and went to my car and cracked it open. The taste wasn’t bad but it tasted more like syrup than juice with the usual energy drink flavors coming through the orangish flavor.

Within 20 minutes of drinking the energy + juice concoction, I did feel more awake and this was after already having two cups of coffee earlier that morning.

When I got home and did some research on this product, I found out that Monster teamed up with Lost Enterprises ( extreme sports clothing/gear) to create this energy drink. Well, the creative team at Monster didn’t use to much creative energy in creating this drink because comparing ingredients showed that it was very similar to Monster Khaos.

Five-O has the same energy blend as Monster Khaos which is 1500mg. This means that Lost Five-O has 160mg of caffeine per 16oz can. There were just slight variations in other ingredients compared with Khaos. The juice blend was the same except Five-O has 50% juice while Khaos has 70%.

Five-O, in my opinion, was just too sweet. I think they could have done without the added artificial sweetener sucralose (splenda) which put it over the top and gave it the typical aftertaste.

Overall, my jet lag seems cured and my hands aren’t shaking while typing this article, but my mouth tastes funny and I couldn’t finish the whole can because of the sickening sweetness. 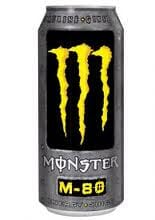 Monster M80: Why Another Energy Juice?
Energy Drink Reviews
Monster M-80 Energy Drink is similar to Monster's other Juice based energy drinks. Here's how M-80 is different and how...

Rumba Energy Juice
Caffeine Amounts
Rumba is a non-carbonated energy drink from Hansen Beverage Company. The drink is based on fruit juice concentrates. Rumba is...