So Monster Energy continues rolling out new drinks and their newest this M3 Energy Drink breaks all the Monster molds.

First it’s in a bottle, a GLASS bottle. Also it’s small, only 5oz, but a shot it isn’t. This Monster M3 is a “super concentrated Monster madness that packs a 16oz punch into only 5oz”.

The label easily explains the explosiveness of the contents, “Grab an M3 glass, and kick some ass”. So now you have my attention Monster, but can the contents back all the labeling?

First of all, let me help you out, the lid is not, I repeat NOT a twist off, so now as my hand bleeds from trying to twist it off, let’s taste the inside. After finally getting the lid off, I got a familiar scent, which was a lot like Absolute Zero. The taste of M3 Energy Drink was a lot like Original Monster, yet a bit sweeter, which I think improves it over the Original.

Also the liquid itself is a bit thicker then you would normally find with an energy drink. Yes it is carbonated, but Monster M3 Energy Drink uses the Nitrous technology instead of the usual CO2 carbonation taste and feel. The sweetness level is real good and the thickness of the drink makes it go down real smooth.

Yes the bottle is only 5 oz, but Monster seemed to jam a lot into that tiny M3 bottle. 2000mg of taurine is a good start, along with 400mg panax ginseng and energy blend of 5000mg! Yes, 5000mg made up of guarana, inositol, glucuronolactone , L-carnitine, glucose, and maltodextrin and 160 mg Caffeine. On top of all that, they managed to fit in 100% of your Vitamin B2, B3, B6 and B12. All that with just 13g of sugar and 60 total calories.

The kick that Monster M3 delivered is just what I expected, intense. It’s been a long time since I felt a rush like that M3 gave me. The buzz was full on about 10 minutes after finishing the bottle. It felt like a sugar loaded jittery rush, yet it did last a bit longer than normal sugar based energy drinks. The effects lasted about 4 hours before just disappearing as quickly as it came, and guess what… no crash either!

As for energy drinks, M3 Energy Drink may be as close to a perfect energy drink as you may find. First the look of the bottle is real cool. Second, it tastes great and with it only being 5 oz, you can quickly drink it without feeling full or bloated. Thirdly, it provided a high intensity rush that is more than enough to power you through anything you will face. I think Monster really put there time and research into Monster M3 Energy Drink and it shows. Great job! 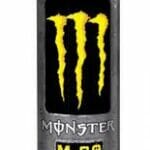 Monster M80: Why Another Energy Juice? Monster M-80 Energy Drink is similar to Monster's other Juice based energy drinks. Here's how M-80 is different and how much caffeine it has.
READ MORE...

Monster Absolutely Zero Review A review of Monster Absolutely Zero Energy Drink including its ingredients, its flavor, and its perceived effect.
READ MORE...
Monster Punch (DUB Edition) Review A review of Monster Punch (formerly DUB Edition) energy drink. How this drink is different from other Monsters and how it functions.
READ MORE...

Muscle Monster Energy Drink Muscle Monster Energy Drink review and caffeine content. How does it taste and how does it compare to other protein supplements.?
READ MORE...
Drinks are reviewed by an independent drink reviewer and do not necessarily reflect the views or beliefs of this site.
Written by Ted Kallmyer, last updated on September 24, 2014