Redline Energy Drinks have long been revered as one of the most powerful energy drinks because of their blending of caffeine with other stimulants.

Here we review 3 versions of Redline.

Warning: Redline Energy Drinks contain extreme caffeine levels and only should be consumed by adults who understand their tolerance to caffeine. 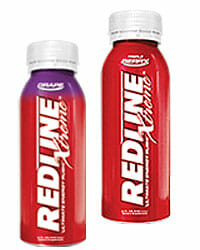 So what’s extreme about it? It’s got the same amount of caffeine as Redline RTD (250mg per 8oz bottle) – but has a whole bunch of other ingredients such as Beta-Alanine, Hordinine, N-methyl Tyramine, and even St Johns Wort.

This is a not an energy drink – it’s… well I don’t know what it is.

Here’s what VPX have to say.

Leave this one to the bodybuilders since Redline Xtreme has some powerful ingredients not suitable for the casual energy drink consumer.

I’m not sure what percentage of the Energy Drink market is targeted towards girls but something tells me it comes nowhere near as close to that of the Male market.

Certain drinks may come to mind when picturing the female marketed drinks such as Tab, Go, and Pink but a new product hits the market today and this time it’s being sold by the originators of the Teenage Mind-numbing Redline product many of you are so familiar with.

The Grape flavor went down smooth and resembled a vita-water type taste to it, no complaints here.

The drinks come in the usual Redline 8 oz bottles and seem to be empty before you notice you’ve drank any. Let me explain this, there’s a reason mixed drinks like Apple-tini’s are called girls drinks, and this happens to be the exact same reason this is called a girls energy drink. No burn, no pain, but ALL the benefits.

No matter what anyone says, this is by far one of the best tasting drinks out there.

And that’s not even the best part; Vital Pharmaceuticals included a feel good chemical Beta-Phenylethylamine HCl (PEA). If you’re unfamiliar with this chemical let me quickly explain.

The theory that Chocolate acts as a Love drug aphrodisiac is solely backed by the presence of THIS additive. Among similar lines it is also closely related to ephedrine, ecstasy, AND mescaline.

Granted you’re not going to be staring at your wallpaper after drinking this but I definitely felt a pleasant head “euphoria” I guess you could call it. Any other descriptions would be elementary sounding such as “fluffy” and “cushioned” so I’m going to stick with euphoric.

In all I stayed alert throughout more than half of the day and that was AFTER coming off of a rough night of sleep, to any of you who are just looking for a good tasting, energizing drink (Even you guys out there).

I would definitely suggest picking this up at your local 711. You might have to check more than one, it seems to be taking them some time to distribute their supply.

Everyone who has ventured into the energy drink market in the last 2+ years has undoubtedly had a run-in with the original “super” energy drink. With its striking blue bottle, solid white cap, and aggressive red text this drink definitely garners attention everywhere it shows.

Have you guessed what it is yet? For those less clued in, I am describing the VPX manufactured Redline. But wait, why am I doing a review on a 2 year old drink? Well my fiends, Redline must have heard our solid appreciation for the flavors of Redline Princess. Today, they announce two new, fairly original flavors to their beloved product.

Princess came in three amazing flavors, Grape, Apple, and Exotic Fruit. All were top notch and enjoyed by many, undoubtedly shifting demand away from the Original Redline. So VPX responded with these, Redline Mandarin Orange, and Redline Peach Mango. Still in attractive blue and red bottles, the only visual cue of the difference is the small fruit graphics on the neck. Logically, the Mandarin has little slices of oranges and the mango has an appetizing bouquet of sliced peaches and mangos.

Cracking the caps, both drinks instantly appease the senses. The orange smells very much like Orange-aid, crisp, clean, and very sweet. Peach-Mango on the other hand, makes you want to melt. It smells exactly like a tropical smoothie and honestly I wish everything I owned smelled just like it. Surprisingly, it doesn’t smell as jarringly sweet as the orange and trust me, that’s a good thing.

Flavor wise both drinks shy away from the usual Redline bitterness and remain fairly sweet throughout the length of the beverage. This is most likely attributed to an increase in sugar content. Don’t stress about more sugar, Redline still remains 0 sugars, 0 calories, 0 fat, and 0 carb, although all of this is due to the use of Sucralean.

Exactly what Sucralean is, I have no clue. I scoured the internet for an hour trying to find out and there’s very few details about it. I eventually called VPX and I’m not even sure they knew what it was. The formal response they provided was “It’s basically a patented form of pure sucralose, which is similar to Aspartame”, When I brought up the fact that Splenda is actually closer to sucralose than Aspartame they changed their answer to “Yeah, well it’s more similar to Splenda than Aspartame and it’s non-nutritive”. So nobody really knows, it could maybe possibly be either splenda or aspartame or pure sucralose.

It seems everyone’s body has a different response to Redline. Some shake uncontrollably, shiver, twitch, feel ultra productive, or I’ve even heard of people who claim Redline makes them feel more lazy than usual. No-matter, there is a unanimous agreement that it speeds up heart rate. As far as I can tell, both new flavors have the same active ingredients as Redline RTD so you should already know what to expect.

The Redline world is one that sits right on the line of energy drink and legal steroid. Would I drink them everyday? Definitely not. Is the occasional Redline invigorating? Completely. But the question comes down to, when reaching for a Redline, would I pick Peach-Mango (My favorite of the two flavors) over Redline Princess? The answer is a resounding no. Princess has all the same bonuses as RTD and then some, unless you’re too embarrassed to carry a pink bottle, I’d stick to to that. If you are interested however, the new flavors should be out soon at your local GNC for around $2.