NOTE: Punched may no longer be available in some markets.

This fruit punch inspired energy drink has been through a few changes over the years and used to be one of the most caffeinated of all energy drinks. 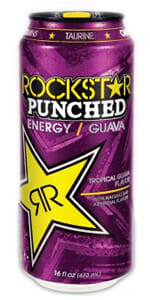 Readers, I am humbled. My search is over, my life is complete, angels are singing out in chorus.I have found salvation, an oasis of productivity, in the best energy drink to ever hit the market: Rockstar Punched Guava.

I always kind of knew Rockstar would be the one to make the breakthrough, I just didn’t know when. The time is now, and I am thrilled. This is the newest drink in the Punched line-up as far as I can tell and is not to be confused with Juiced Guava.

I have numerous other reviews I’ve been piecing together over the past week, but at the first sip of this drink I’ve committed my focus to spreading the good word. No-thing-com-pares. This is the stuff caffeine addictions are made of.

Please Note: This version of Punched Guava is no longer available. Punched Guava now comes in a 16 fl.oz. can and looks like the formula has been adjusted as well.

Marvelous, aggressive, and kindhearted with a forgiving personality. Carbonation is perfect, the guava flavoring is not intrusive and it never gets old. Each sip, an influx of taste euphoria; each swallow, a conditioned reward for the next sip to come. This drink can be mixed with just about anything too, ranging from 7-up to Bacardi. When you first get into bed with this drink, do not hold back. Just be yourself and go all out, you will be welcomed into open arms.

Rockstar blends the best of both worlds. It does not depart from the wealth of natural energy ingredients so commonly found out there in energy drinks (ginkgo biloba, ginseng, milk thistle extract). At the same time, they acknowledges the fact that not one of these ingredients have been scientifically shown to do much of anything for you, so they hit it where it counts.

There is an incredibly thoughtful 120mg of caffeine per serving, and um… ya, hi – there’s 2.75 servings per bottle. No, that’s not 122.75mg of caffeine per bottle. The theory of multiplication would have it that this drink contains 330mg of caffeine, not to mention the ~68mg of guarana and B-vitamin content (!). Yes, that’s more than even most energy drink lovers would care to down in one sitting, But guess what, this drink comes in a bottle. Drink some now, some later! The angelic chorus grows louder…

My information processing bandwidth was just upgraded from 56K to T1. My thinking engine from an economic inline-4 to a twin turbocharged V12. The electrical conductors of my brain upgraded from nickel to gold and I’m only half-way through. My productivity has skyrocketed. I’ve basically written this entire review in about 25 minutes, no joke. After waiting a few hours, I’m happy to report I experienced no crash.

Let me add I bought this drink for $1.99. It’s just too good to be true. I feel like God kills a kitten every time I drink one. Energy drink lovers, your search is over.

News Flash! We in the Southern Hemisphere have been cheated!I was stoked to see Rockstar Punched Guava in New Zealand stores because of the great review Dusty gave it a little while ago.

However, upon closer examination I discovered that it has a different formulation and not in the good way.

The can did create quite a bit of attention as I was sitting at the cafe eating lunch. People seemed to be amazed and strangely drawn to the huge, purple 500ml can sitting on the table.

Rockstar Energy has established a separate Australian Division to their Company and unfortunately for us has to adjust their drinks to conform to the caffeine regulations in AUS and NZ.

The good news is Punched Guava has pretty much the same taste Dusty raved about. From the first sip I knew that it was a winner and with later gulps, I had to remind myself that I was drinking an energy drink…Yes, it is that good! Completely void of any mediciney taste whatsoever.

The only complaint about  Punched Guava would be that I found it a tad too sweet. It was great at first, but towards the end of the can the 83.5 grams of sugar was making my teeth hurt. Certainly not something you want to drink after having teeth whitening; caffeinated drinks already have a reputation for discoloring teeth!.

Ok, here’s the sad part. This version of Rockstar Guava only has 160mg of caffeine per 500ml while in the USA this energy drink has 254mg/500ml. Also, the down under version has no milk thistle. As for the rest of the ingredients they appear to be the same.

I’m sure you know the feeling, you have just eaten lunch and now you’re back to work fighting to stay awake at your desk, right? Well, drinking Rockstar Punched Guava with my lunch completely annihilated my desire for a siesta. I’m not crazy energized, but feel pretty motivated.

My number one drink in New Zealand used to be Rockstar Juiced, but then last week Demon Killa Troppo toppled it from its throne. Now it seems I have a new contender in Rockstar Punched Guava. I guess it might come down to price when I’m forced to decide between the two.

Note: This flavor has been phased out.

Rockstar has won its place among the top energy drink brands by promising its customers that they too can party like a Rockstar. And despite the decidedly “cool” aura that surrounds the drink, I’ve never been a big fan of their flavors.

The original suffers from the mediciney aftertaste that plagued many early energy drinks. The Guava Juiced flavor was hard for me to even finish. It wasn’t until I found the “Punched” can that I even gave them a second look.

The Punched flavor quickly became my goto drink and had me rethinking my stance on Rockstar. So, as you can imagine, I was intrigued when I happened upon a Rockstar Citrus Punched several months later. Let’s see how the Vegas boys do this time.

The first time I took a swig of Rockstar Citrus Punched I was hooked. It’s a classic clean flavor similar to childhood favorites like Squirt or the 7-Up punch my aunt used to make for holidays. Similar, but not the same. It has its own distinct mark on the citrus drink that I can only attribute to the acai berry listed on the front of the bright green can. Best of all, it has a dry finish that doesn’t leave your mouth gummy like it’s sibling Punched flavor.

Citrus Punched advertises as having 50% more caffeine than standard Rockstar at 120mg per serving. It backs up its potent blend with generous amounts of B Vitamins, Taurine, Ginkgo Biloba, Guarana, Inositol, L-Carnatine, Panax Ginseng Extract, and Milk Thistle Extract.

Great flavor aside, Citrus Punched stands up as a powerhouse energy drink. 240mg of caffeine per 16oz can wakes you up and the rest of the blend keeps you going for 5 hours or more of strong energy. Several weeks of using this drink as my everyday start-up did not disappoint. While high in sugars, the lack of High Fructose Corn Syrup limits the crash typically felt with such powerful drinks.

Overall, this drink is top notch in every category and has changed my opinion of Rockstar. They’ve gone from ubiquitous yet underwhelming to a premiere player.

Some versions of  Punched have 240mg of caffeine per can and should be consumed with caution. Consume no more than 1 of these per day.

Rockstar Recovery Energy and Hydration Review
Energy Drink Reviews
A review of Rockstar Recovery, which is a line of energy drinks that's designed help you after exercise or a...
Written by Ted Kallmyer, last updated on February 16, 2021