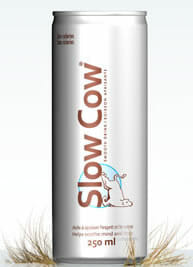 Slow Cow is a beverage that’s supposed to relax you instead of give you energy.

And, because of our dependance on caffeine, many are looking for such a product to help them relax and sleep.

We received a question from a visitor regarding Red Bull.

“I have realized that if I drink a can of Red Bull in the afternoon about 4pm, I don’t have a very good nights sleep. Either cant get to sleep or wake up after an hour. Can you take anything that would neutralize the caffeine? Will stop drinking red bull from now on.”

We have found the answer Linda and its Slow Cow. So  if Red Bull “gives you wings” then Slow Cow “gives your eyelids lead weights”. Here is how Slow Cow “calms you down”.

Does it Neutralize Caffeine?

No, Slow Cow will not neutralize the caffeine, only the herb Evodea has been shown to do that.

Slow Cow may make you more relaxed but any caffeine in your system will be metabolized at the normal rate.

Slow Cow Mind Cooler is available in Canada, Brazil, Bolivia, Australia, and many other locations around the world.

I think I’m ready for a nap just from typing that ingredient list. So snuggle up with good book and a can of Slow Cow and dream of flying instead of really doing so with the wings you get from Red Bull.

Nerd: Focus & Energy Beverage Review Here's my review of Nerd Energy Drink. It's supposed to provide focus and energy for students to ace exams, but does it deliver and what's in it.?
READ MORE...

28 Energy Drink: Black and White Review A review of 28 Energy Drink Black and White. This popular European Energy Drink (Calidris 28) is now available in the USA. See what's in this drink.
READ MORE...
Drinks are reviewed by an independent drink reviewer and do not necessarily reflect the views or beliefs of this site.
Written by Ted Kallmyer, last updated on June 22, 2016