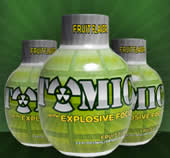 So I received Tomic energy shot a few days ago, and the packaging sticks out (resembling a small hand grenade), yet will it match the standards set by nearly all other energy shots, which if you can handle the brutal taste, then you can get a little kick or will Tomic blow the other guys out of their bunkers?

The label says fruit flavor, so it must be ok, right? I popped the top and took a whiff. It smelled like an energy shot with a little fruit scent, but not really sure how else to explain it. As for taste, Tomic is not your traditional shot at all. Most shots I find to be bitter and very strong tasting, yet Tomic was very sweet. Very smooth and a quality fruit flavor. A 16 oz can might be too sweet, yet for a 2oz shot, it fits just right.

The advertised explosive focus and energy  produced by Tomic is supposed to come  from a combination of Niacin, vitamin B6 (2000%) and B12 (8333%) along with 1870 mg of their “energy blend” as is labeled, made up of caffeine, Taurine, L-phenylalanine, L Tyrosine, Glucuronolactone, N Acetyl L Tyrosine, , Malic Acid, and Choline.

I find many shots try to give you the quickest boost of sugar/caffeine powered energy, while that is a great way to receive that bit of energy you’re seeking, its the crash that soon follows which sucks.  Tomic, on the other hand, provided a nice boost after about 10 minutes which was much smoother instead of the roller coaster of a quick rush, followed by even a quicker crash. Tomic did a good job of maintaining a nice clean boost.

I’m not really a huge fan of energy shots, mainly because about 90% of the ones on the market are undrinkable, yet Tomic was very pleasant. I will definitely keep a few around to get me through those never ending summer days when the weather is perfect and time at work seems to never cease, a little Tomic will be just right to explode me into an early weekend… 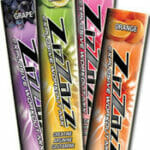 ZizZazz Explosive Workout Mix
Energy Drink Reviews
Instant energy is where it's at. When you consider the insane studying, work, and play that we often engage in,...

C-4 Explosive Energy: This is Crazy
Energy Shots
This product has been discontinued   C-4 Explosive energy looks like a firecracker. Go to the website and your fellow...