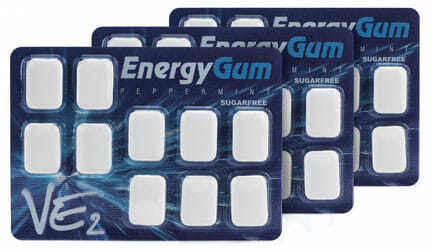 When it comes to getting your caffeine fix fast, gum is hands-down the best option. Just ask the U.S. Military, who developed Stay Alert for its soldiers.

The latest addition to the growing selection of energy gum is VE2 Energy Gum. Developed by a doctor, VE2 says their gum is the fastest, safest, and most convenient way to get an energy buzz. We will put that claim to the test.

VE2 tastes like any ordinary sugar-free peppermint chewing gum. Initially starts sweet, then the flavor slowly diminishes. It lasts for about 5 minutes and by then you’ve absorbed all the caffeine your oral membranes can take.

VE2 contains a plethora of staple energy ingredients; including caffeine, B6, B12, niacin, ginseng, and guarana to get you going. VE2 claims 2 pieces is about one 8oz energy drink or a cup of coffee’s worth of caffeine which is around 80mg. This is less than standard drinks like Monster, but in a very concentrated package.

Even after finishing 1 piece I felt it immediately, using it as a substitute for my energy drink in the morning. I haven’t had anything that kicks in this fast before! VE2 provides a concentrated boost of energy that really helped me rip into the books and get things done. I didn’t crash hard either, as is the case with some full-size energy drinks.

VE2 Energy Gum is an excellent way to get an energy boost without having to carry around liquids. This stuff could be especially convenient during sports and other vigorous activities. The flavor is nothing special, but this gum definitely does what it was meant to do. 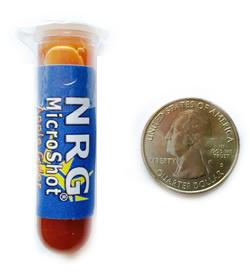 NRG MicroShot
Caffeine Amounts
Caffeine amount in NRG MicroShots as well as a review of how the energy shot tastes, functions and its ingredients.

Boost Energy (UK)
Caffeine Amounts
Boost Energy Drink is a low-cost carbonated energy drink in the UK. It comes in a variety of flavors and... 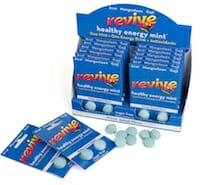 Revive: Nature’s Energy Mint
Candy
With the recent decline in new energy drinks, it comes as no surprise the caffeinated candy market has also taken... 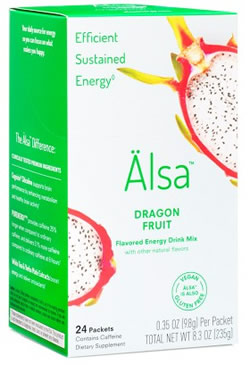