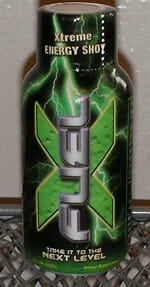 Energy shots have been recently multiplying so rampantly that they’re rivaling the production rate of new I-Pod accessories, which is saying a lot (looking for a source for that claim? Don’t bother, I made it up).

Spin those little bottles around to their ingredients label and you’ll see that they’re all pretty much the same. Either they’re B-Vitamin shots (like Chaser 5 Hour) or shots that mimic the normal energy drink blend (like Monster Hitman). To borrow from a popular saying, always judge an energy shot by its label.

Now, there are a few exceptions out there to this generalization, such as Mana Energy Potion and Fixx Ultra Shot. The present shot, X-Fuel, is not one of those exceptions.

Nothing unique to report here, X-Fuel tastes like every other B-Vitamin shot out there. The standard schedule of events applies: an initial taste bud shock from the concentrated sucralose-laden flavoring, a prod of fake berry flavoring, and a slowly fading aftertaste.

When I first pointed my attention to the nutrition label, I did one of those *continue to let attention wander, have a strong sense of familiarity, have a small epiphany, immediately look back* things we’ve all had happen to us. Ok, so what follows is a strong affirmation to me that I’m wayyyyy too involved with energy products.

I recognized all the numbers on the ingredients label. I knew exactly where I’d seen them before. I hurriedly opened up a session of Google and found myself in shock and awe. The content in this copy-cat shot is nearly IDENTICAL to that of Chaser 5 Hour Energy. 2K% of our B6 daily value, 8,333% of our B12 daily value, and a caffeine content buried in a “proprietary blend” (assumedly 80-100mg) are the highlights.

Exactly what I expected. Sure, I probably fell victim to confirmation bias, but the point is this shot did not wow me. It was just a standard baseline energy boost compliments of B vitamin content. It’s a nice boost that reliably lasts for a few hours, but guess what? It feels oh-so-familiar. Yep.

This shot has left me with a disappointment for where things are going in the energy drink market. I understand the boom in newcomers to the market and I welcome the extreme variety it has brought to us. What I don’t appreciate is when a manufacturer is so anxious to get in on the action that is the $3.8 billion dollar energy drink market that they don’t even bother with innovation.

All that sets this shot apart from other Vitamin-B booster shot is the genre, it’s targeted towards. This energy shot is exclusively aimed at the video gamer niche. This alone will likely keep them alive, for very few shots like this exist. So as long as they play their PR cards right, I believe they’ll make sales. In the big picture, though, X-Fuel does not practice what it preaches and “take it to the next level.”

Editor’s Note: X-fuel wouldn’t disclose the actual caffeine content to us when asked. 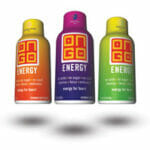 OnGo Energy Shot: Go On Try One
Energy Shots
When energy shots first hit the market, I would not be one to place a lot of value on their... 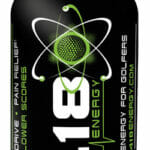 418 Energy: Golfer Fuel
Energy Shots
John Layfield is without a doubt a major wrestling superstar, a powerhouse who held the belt for a very long... 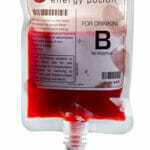