Their mission is to create an energy shot that gives consumers more than the typical energy shot like 5 Hour Energy does while being completely transparent about exactly what's in their product.

All flavors have the same ingredients and the same caffeine level.

The company sent Caffeine Informer free samples of each flavor for review.

I can't even count the number of energy shots that I've tried over the years, so it's always interesting to see if a new player actually has anything new to bring to the table. In the past, most shots were just a different alliteration of the same basic energy ingredients.

When I was first contacted by Phoenix, I was excited to see that this new shot actually offered something different.

I tried all three flavors of Phoenix Energy Shot and the company did a nice job in this area. As I'll get to in a minute, there are a lot of ingredients in this shot so it would be quite a feat to make them undetectable. I could definitely taste the active ingredients but the sweetness and fruity flavor did a good job of making the shots drinkable.

Most people consume energy shots quickly and don't sit and sip them like a fine wine, so the taste is on par with that notion.

Phoenix Energy Shot contains 12 active ingredients and they range from common ingredients like caffeine to less common ones that are nootropic in nature. I like that Phoenix discloses exactly how much of each ingredient is in their product. The complete list is below.

With 280 mg of caffeine per bottle, Phoenix packs a punch in that department. So much so that consumers should use a bit of caution when using Phoenix. First-time users or those without a caffeine tolerance may want to start with half a bottle.

I felt the effects within 10 minutes of drinking Phoenix and although there is a lot of caffeine, I didn't feel nervous or jittery. The other active ingredients did a great job of balancing out caffeine's less desirable effects. I experienced an elevated state of alertness and a positive mood for about 6+ hours after consuming Phoenix.

Overall, I'm impressed with Phoenix Energy Shot and they should be commended for bringing something different and something more to the table.

Because of the high levels of caffeine in Phoenix, it should only be used as directed and used by healthy adults only.

https://phoenixenergy.com/ and the product labeling See other references.

Sport Max Energy Shot
Caffeine Amounts
SportMax Energy Shot caffeine content and review. How does it compare to other shots and pre-workout supplements? 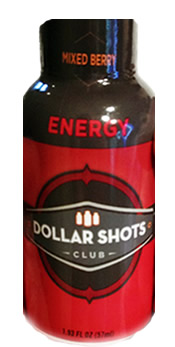