Having not written a review for some time, I was surprised and delighted to find a package full of Century Energy Drink on my doorstep, nearly chilled to ice during its transit through harsh the Canadian winter.

Century comes in the familiar 473ml (16oz) can, with the familiar banner at the top displaying ingredients like caffeine and guarana, but what is not so familiar is that Century proclaims support of several charity groups on the side of the can, which is definitely a great thing.

Also unfamiliar is Century’s pineapple flavour – a rarity amongst energy drinks. I’m excited to give it a try.

Century is shockingly great tasting. I was skeptical of how good pineapple could be mixed with typical energy drink ingredients, but I was absolutely surprised. This is certainly an authentic pineapple taste akin to drinking pineapple juice itself. It’s sweet, but not too sweet either. I’m impressed.

Century is loaded with 147mg of caffeine, 47.3mg of guarana, 23.64mg of yerba mate, and even a little green tea at 2.37mg. These are comparable levels to most energy drinks in the 473ml size category. It also features vitamin B6, B12, inositol, riboflavin, and pantothenic acid – all good for the body and found in most energy drinks. HFCS and sucralose sweeten the beverage in just the right amount.

At the time, I had just arisen from sleep and felt like a monster. The first thing I went for was the can of Century Energy Drink in the fridge – and upon cracking it, I knew I was in for something good. On an empty stomach, Century gave me enough of a push to get me out of the morning fog and into a productive mood. Being used to caffeine’s effects, I didn’t get the jitters. Perhaps the additional yerba mate and green tea created a mellowing effect. It’s not a drink that’s powerful enough to keep you up all night, but most people aren’t looking for that anyway (except university students :P).

Century is certainly a drink I’d pick up if I was in need of refreshment with a little kick. Flavour is the first thing people notice when consuming energy drinks and Century definitely delivers in this aspect. Perhaps a bit more caffeine would enhance its effects and its ability to compete with more powerful and well-established drinks on the market. As for me, I think Century Energy Drink is a well-balanced and a tasty choice for anyone. 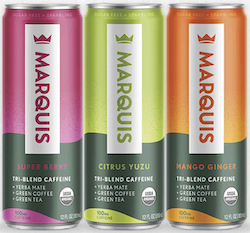