We were sent some samples of Karvana to try by the company. I have tried Kombucha tea in the past and haven't been a big fan of the drink. Kombucha is made by fermenting tea, which produces a slightly effervescent, vinegar-like drink. The vinegar part is what I do not care for.

Using berry flavor, sugar, and stevia; Karvana covers up the vinegar-like taste pretty well, but it is still detectable. Luckily it's a small shot and can be consumed after a few swallows. Some people love the taste of kombucha and these people would probably really like Karvana.

Equal to a Cup of Coffee?

Karvana Kombucha Energy Shot lists 110mg as their caffeine content and I felt a nice wave of alertness after about 15 minutes. However, I'm a bit confused about how they arrived at this number. They list guarana at 60mg and green tea at 50mg which would equal 110mg, BUT, guarana isn't 100% caffeine nor is green tea. Also kombucha should have some caffeine in it naturally since it is made from tea. Perhaps, I'll get some clarification on this. Karvana also makes a standard probiotic shot with 10 billion active cultures. This shot should have a small amount of caffeine in it, so we're trying to nail down that amount as well. Those that enjoy kombucha and energy shots will probably find Karvana Kombucha Energy Shot a great all-in-one product. I'll probably stick to getting my extra probiotics through kefir.

The bottle, our review.
Other references. Last updated on 4 Mar 2021.
Suggestions or corrections? Send Feedback 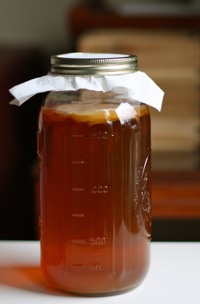 Kombucha Tea
Caffeine Amounts
Kombucha tea is made from fermenting black tea leaves from a mother culture. In general there is 1/3 to 1/2...