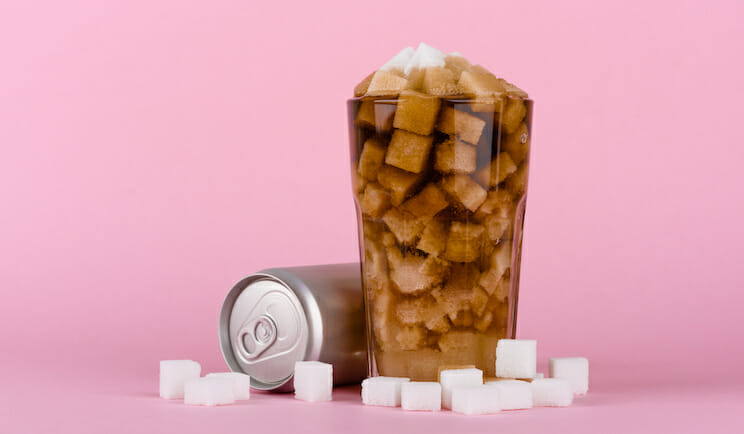 A comprehensive database of the sugar amounts in soft drinks, energy drinks, coffee, and tea beverages.

Where the sugar level is zero – the product may be sweetened with an artificial sweetener (such as aspartame, Splenda, acesulfame potassium, or stevia).

Since this list was first created in 2005, sugar levels have been coming down. Almost all beverage manufacturers have been reformulating drinks to have less sugar.

Some drinks and juices have as much sugar as several Snickers candy bars and are definitely contributing to the obesity and type 2 diabetes crisis the western world is experiencing.

In response, most manufacturers have created zero sugar alternatives which are proving very popular (such as Monster Ultra).

It is estimated that the average American consumes around 150 pounds of refined sugars a year. src.

Too much refined sugar in the diet is linked to many adverse health conditions. The American Heart Association tells consumers to have no more than 6 teaspoons or 24 grams (women) or 9 teaspoons or 36 grams (men) of refined sugars each day.

Since many are having 4 times that amount, they are also reaping the health consequences of consuming too much sugar in drinks and other foods. Some of those include:

Americans may be starting to get the message about the dangers of sugar consumption. A recent study found that it is actually on the decrease for the first time in many decades.

Americans consumed 16.8% of their calories from refined sugars between 1999-2004, but between 2005-2010 this amount decreased to 14.9%. (Reducing sugar as well as overall calories consumed daily is accredited with positive health outcomes.)

This also corresponds to the decline in soda sales over the same time period. Hopefully, people are getting the “less sugar is better” message and consuming drinks with less sugar and more plain water.

Another study out of Macquarie University showed that sugar and caffeine when combined and fed to rats, produced lasting changes to brain chemistry. This could allude to how sugary sodas and energy drinks could possibly affect human brains.

*Researchers from the the University of California in San Francisco found that those who drink just 20 fl oz of sugary soda a day may take as much as 4 years off of their lifespan. Not only do soft drinks contribute to disease, but they also shorten telomeres, which are the areas on our genes responsible for aging.

A 2015 study from The Harvard School of Public Health looked at the health effects of high-fructose corn syrup and sugar-sweetened soft drinks. They analyzed much of the research to date and found that 1 to 2 sugary beverages a day can lead to:

In addition, a CDC study that showed that two-thirds of all kids living in the US consume at least one sugary beverage daily. On average, boys consume 164 calories from sugary drinks each day and girls consume 121 calories daily from sugar-rich beverages.

What You Need to Know

Why is so much sugar placed in drinks?