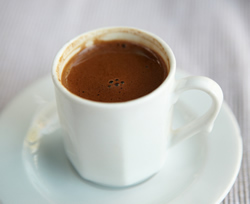 Turkish Coffee is a popular method for brewing coffee that was developed in the country of Turkey.

It can be found in most parts of the world in Turkish restaurants.

With this method, one heaping teaspoon (approx. 5 grams) of finely ground coffee is added to “cezve” (pronounced “jezz-va” ) pot, along with 1 teaspoon of sugar and 1/4 cup (60mls) of water.

Not all people in Turkey prefer sugar and Turkish Coffee can be made to preference; Black ("Sade"), with little sugar (az sekerli), with moderate sugar (orta sekerli) or lots of sugar (çok sekerli).

It is also common in Turkey to make their coffee with 2 teaspoons of ground coffee which would double the caffeine content listed above.

The mixture is heated until the crema rises to the top. The crema is then poured into the cup. The cezve is then placed back on the heat until another layer of crema forms. This is also poured off into the cup. Now the Turkish coffee is ready to be served.

Turkish coffee is usually served with a piece of Turkish Delight and a glass of water.

The caffeine content of Turkish coffee can vary between 40-60mg due to a number of factors. The amount above reflects what one could expect to find on average.

Where To Buy Turkish Coffee 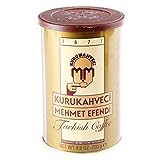 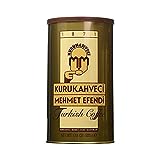