Spike hardcore Energy Shot is actually twice the size of regular energy shots and each bottle has two servings.

Now, according to the nutrition label - this thing contains 175mg per serving - and two servings per bottle. So - 350mg caffeine in half a cup.

That's quite a punch. Given that most energy drinks around the world measure up at 80mg caffeine per 8oz - this thing is seriously strong stuff.

Along with the caffeine is some Vitamin B12, N-acetyl-L-tyrosine, and Beta-alanine. 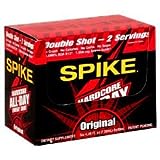