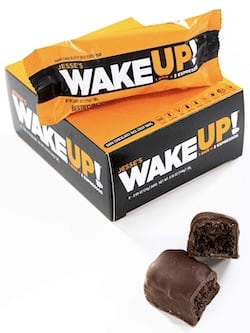 Jesse's WakeUp bar is a caffeine enhanced snack bar with the caffeine of 3 strong espresso shots.

The bar was created by Jesse after he fell asleep at the wheel of his car and almost had a severe crash. He saw the need for a product that contained natural caffeine but could be consumed quickly but in a great tasting way.

Jesse recently sent us some free samples for review.

When Jesse reached out to me about his WakeUp bars, I was certainly intrigued. There are no other snack bars this high in caffeine so I was both excited and nervous to try them since one bar is a little more than my personal daily dose of caffeine.

I was expecting WakeUp to be a lot bigger given the amount of caffeine but the bar is pretty small at just 21 grams. After the first bite, it was nice to find out that WakeUp offered a delicious dark chocolate flavor with the nice texture of crisp rice. It wasn't overly sweet and despite the huge amount of caffeine, there was just a slightly bitter taste only noticeable after finishing the entire bar.

Wow, I can't think of a more fitting name for this product. This bar jolted me out of my mid-morning slump and I definitely did WakeUp! I also liked that these bars have limited added sugar and use some natural sweeteners to enhance the sweetness without the calories. Each bar is just 90 calories and 9 grams of total sugar.

In any event, WakeUp is a powerful bar and does exactly what it says it will do. Plus, it's enjoyable to eat.

There's a warning on the bar and consumers would be wise to head that warning. Only eat WakeUp if you are healthy and tolerant of caffeine. Some should start with just half a bar.

Where To Buy Jesse's WakeUp Bar 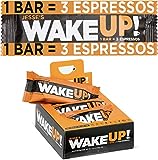 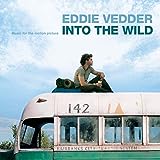 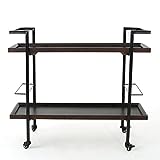