Redline Energy Drink may be racking up a history of sending some people to the hospital with health problems.

After all, Redline is one of the most powerful energy drinks and has even been pulled from some retailers’ shelves.

Redline is really intended to be used as a workout aid and energy drink enthusiasts know that Redline is a drink that you don’t mess with.

The label on the bottle says to only drink half of a bottle at a time.

However, some fail to heed or read this warning and have found themselves in the hospital because of Redline.

Here are some reported cases of people drinking Redline and then experiencing negative health consequences.

Is It just the Caffeine in Redline?

Besides the caffeine Redline contains (250-316 milligrams), it also contains Yohimbine, which is another powerful stimulant. According to drugs.com, the side effects of Yohimbe are as follows.

At Caffeine Informer we believe there is shared responsibility on both the part of the manufacturer and the consumer.

The manufacturer must clearly post warnings and directions of use as well as not promote the product where it could fall into the hands of minors.

However, it is the consumer’s responsibility to heed warning labels and use products only as directed.

Some may not understand how his/her body will react to the stimulants in Redline and that is why consumers are directed to consume only half a bottle at a time.

We hope the reports of the hospitalizations as the result of Redline, will teach people to follow the energy drink’s warning label and prevent history from repeating itself.

Despite the danger associated with Redline, it paved the way for VPX to develop Bang Energy which is a widely popular energy drink with 300 mg of caffeine per can.

Because Bang became so popular, other fitness nutrition brands began making their own highly caffeinated sports drinks. Now we have a whole segment of energy drinks with potentially dangerous amounts of caffeine. It has never been more important for consumers to be caffeine smart in both the awareness of how much caffeine is in a beverage and how their particular bodies respond to caffeine. 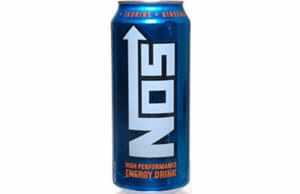 NOS Energy Drink Sends Teen to Hospital
Energy Drinks
NOS Energy Drink has sent at least one teen to the hospital. How it happened and steps you can take...
Written by James Foster, last updated on March 31, 2020