Formula168 Surge Energy Shot is a non-carbonated energy supplement made by Formula168.

It's intended to be different than other energy shots which rely on large doses of caffeine to produce an immediate boost in perceived energy. Formula168, instead, focuses on increasing a more sustainable lift over time.

The company recently sent us some free samples for review.

I was initially intrigued by Formula168 because of the relatively low caffeine level the product contains. This is a huge departure from the mainstream energy shots on the market.

The flavor of Formula168 Surge is nice. It's a slightly tart blueberry flavor that is easy to drink quickly.

The sweetness of the shot is enhanced using zero-calorie stevia which produces just a slight aftertaste.

A therapeutic dose of caffeine for most people is 20-30 milligrams. This means that this is the lowest amount that will produce any perceived effect on an individual. Since Formula168 Surge contains just 26 mg of caffeine, most will experience very little caffeine benefit from the shot.

Those that never consume caffeine may detect more, but for habitual caffeine users, it will probably go unnoticed.

Therefore, it's hard for me to determine the energy effectiveness of Formula168 Surge. Since it's going for a more long-term energy gain, I would probably have to drink several shots over the course of several days to determine if my energy levels have increased.

When it comes to other energy drink shots on the market, I commend Formula168 for taking a different approach. However, for those switching to Formula168 from other energy shots like 5 Hour Energy, it would be wise to make sure they supplement caffeine to equal their usual dosage to avoid nasty withdrawal symptoms that result from drastically reducing daily caffeine consumption.

Formula168 also makes an energy drink which is listed and reviewed here.

Includes 5 grams of sugar (per 2 ounces) for a total of 0 calories. 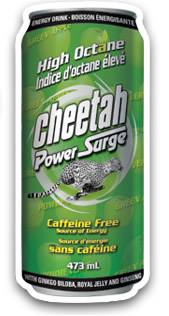